COVID-19 is a significant threat to humanity. In the Western countries, in particular, the death toll from COVID-19 is already in the hundreds of thousands. While the spread of COVID-19 has become a serious social and public health issue in East Asian countries, including Japan, the fact that the mortality rate associated with the disease has remained lower than in the United states and European countries is attracting attention from around the world. Potential factors have been pointed out, including the high rate of face mask use and hand hygiene compliance, potential acquisition immunity from similar past viral outbreaks, and BCG vaccinations as well as the standards of medical care based on a universal health insurance system in Japan, in particular. But there has also been speculation that genetic differences between different populations may also play a role. 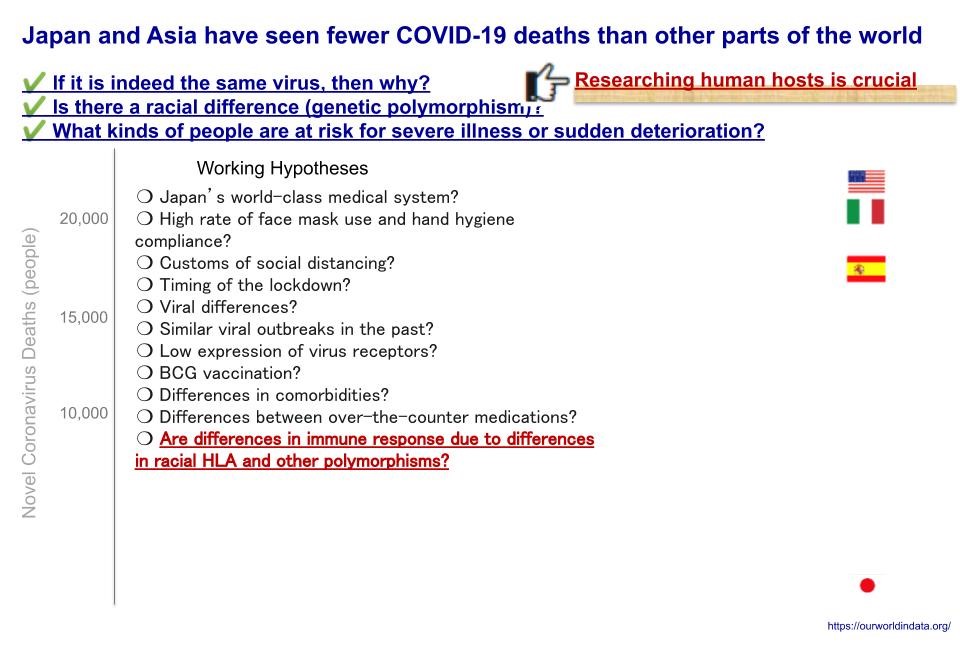 Typically, when an unknown virus infects a human host, various biological mechanisms are triggered to eliminate it. These mechanisms are known collectively as immunity, of which there are two main types: innate immunity and adaptive immunity. The mechanisms of innate immunity are naturally possessed by humans and provide an early line of defense against various bacteria, viruses, and toxins. On the other hand, adaptive immunity is an immune response that comes later, where cytotoxic T cells specifically recognize and remove cells infected with a particular virus, and B cells produce specific antibodies that neutralize the virus. Once established, this immunity is “adapted” or “acquired,” and the next time the host is infected with the same virus, it can be eliminated immediately. 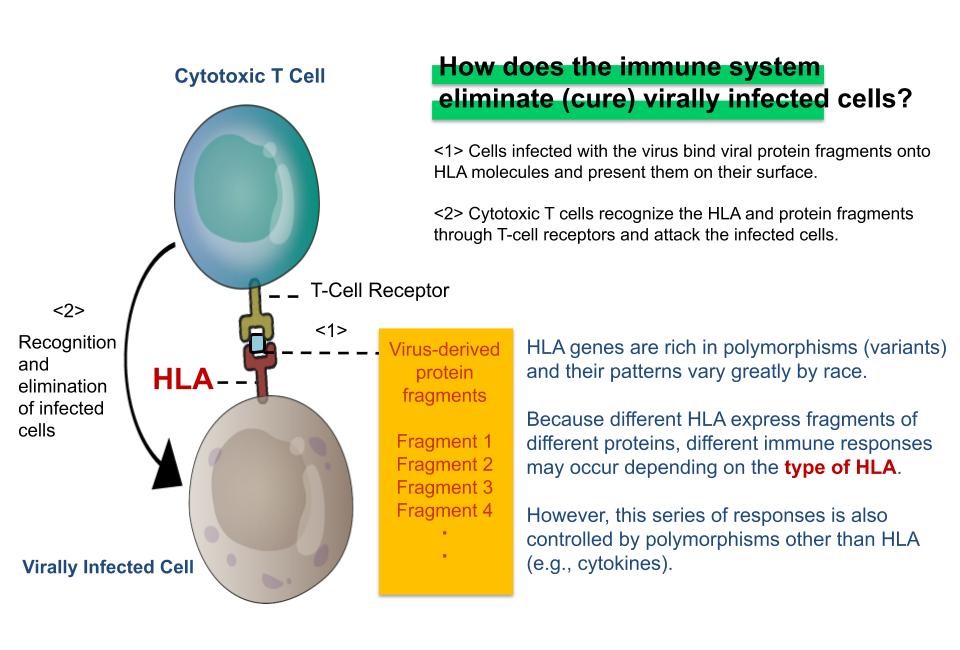 Immune response to a virus also varies from individual to individual due to differences in the nucleotide sequences of genes called “polymorphisms.” This variability means that even if two people become infected with the same virus, polymorphic variations may yield different immune responses. In an immune response, a group of molecules collectively referred to as HLA (*3) acts as a command tower that induces adaptive immunity, specifically binding to bits of virus proteins, generally referred to as epitopes. The recognition by T-cell receptors of epitopes bound to HLA is the key to the function of adaptive immunity, which is expressed in the function of cytotoxic T cells and antibody-producing B cells. There are many types of HLA genes (HLA-A, B, C, DR, DQ, DQ, DP, etc.) and the polymorphism in each HLA (e.g., HLA-A) are known to vary for individual to individual. This is thought to be related not only to differences in responsiveness to viruses but also to susceptibility to seasonal allergies and many other immune-mediated diseases. On the other hand, these immune responses, including innate immunity, are also strongly affected by individual variation other than polymorphic HLA genes, suggesting that various polymorphisms, in addition to HLA, play a significant role in the exacerbation of COVID-19. 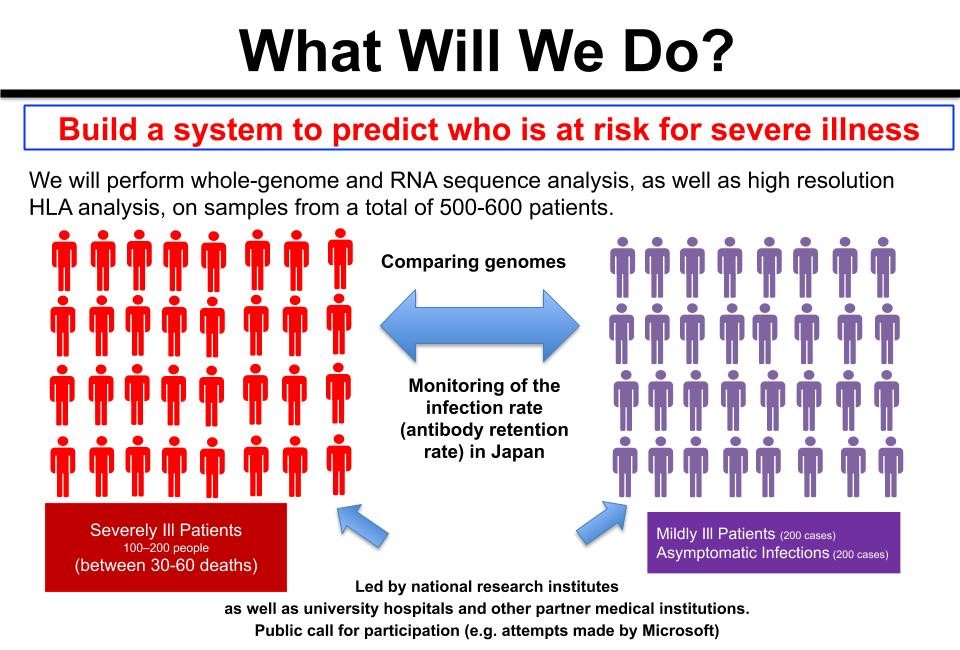 We ask, “Are polymorphisms, including HLA, involved in the exacerbation of COVID-19?” And if so, then we must also ask, “What kinds of polymorphism in which genes are involved?” If such polymorphism is present, we can presume that the frequency will differ between severe and mild or asymptomatic cases.

Therefore, our research aims to determine all gene sequences for patients who have become severely ill with COVID-19 as well as patients who had only mild symptoms or were asymptomatic and to find polymorphisms that differ in frequency between these two groups. One factor involved in the exacerbation of COVID-19 that has drawn attention is the phenomenon known as a cytokine (*4) storm. During these storms, proteins called “cytokines,” which regulate the function of immune cells and the body’s immune response, are generated in excess, resulting in damage not only to virally infected cells but also to healthy cells and organs. Such a phenomenon may also be affected by genetic polymorphism.

Meanwhile, the development of an effective vaccine is the key to overcoming emerging viral diseases. Identifying genes involved in exacerbation of COVID-19 that are unique to Japanese people would be useful not only for predicting that exacerbation and developing effective therapeutic agents but would accelerate vaccine development. The research team also possesses unique technologies such as molecular needle and organoid (*5) technology. These proprietary technologies are expected to produce synergistic effects in the development of a SARS-CoV-2 vaccine. 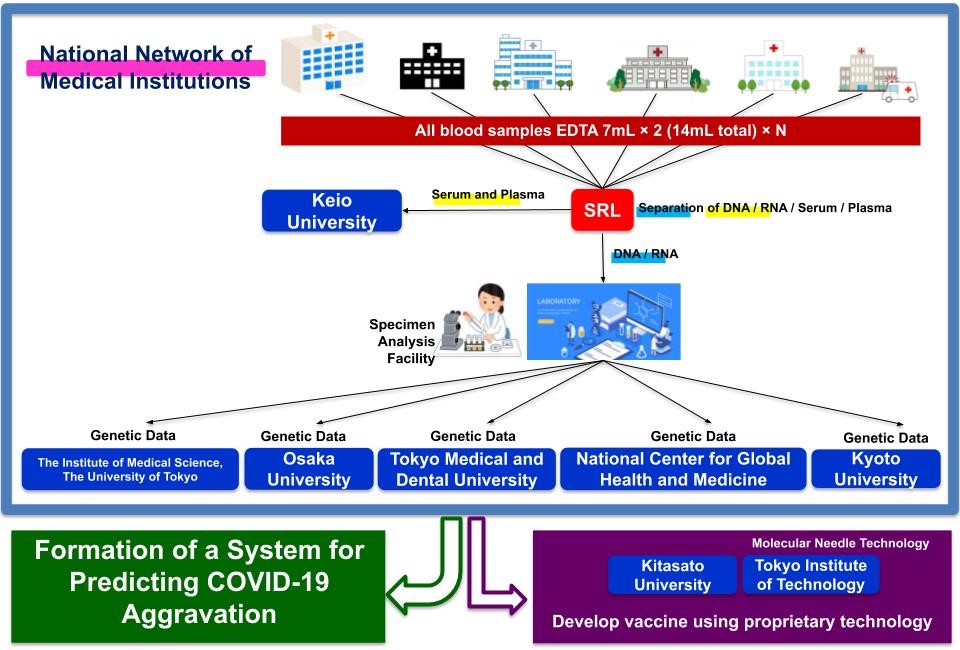